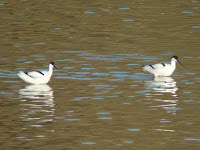 Baby Jack woke me up before first light so decided head too Frodsham earlier than expected arriving half an hour after dawn. Loads of finches on the way into the marsh as well as Chiffchaff & Willow Warbler. I headed for the bend first Sedge Warbler sang from the reeds and Plenty of Reed Buntings on the walk along. Managed my first Common Sandpiper of the year just before the bend. While 4 Avocet 1Barwit 1Ruff 1Ringed Plover & 20 Redshank on the bend. Other Birds to note where Dabchick Gadwall + Regulars. A run around to 6 tank had me my first Whitethroat of the year as well as White Wags and a single Yellow Wag. 50c Golden plover invthe fields showing signs of Summer. Over 50 species seen without really trying. Onto Sandbach after the marsh A bit quiet but 30 Black Tailed Godwits and 2 Little Ringed plovers were the best of the bunch. Green Sandpiper was reported earlier in the morning. Id got a few more hours to kill so i shot over to Coombes Valley via N Staffs moors very little on the moors they seem to be cruel to me at the moment. Coombes was not much better. Perhaps of been better concentrate around Cheshire
Posted by Paul Shenton at 12:52