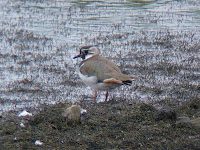 With only having a few spare hours it was local watching again. Managed get to Tittersworth for just after 5.30 with one a two birds about. It was nice see Dunlin along with 3 Ringed Plover. Little Ringed peaked at 3 while I was there. The 4 Common Sandpiper Sandpiper seem to have paired up whilst the Pied Flycatcher as you enter the reserve is still struggling. I also heard another some distance away off the causeway. Other notable birds were Curlew, 2 Cormorant and Whitethroat. The weather deteriorated quickly as i reached the moors. NO LUCK AGAIN with Golden Plover but Peregrine and Snipe threw in an appearance as did Linnets and a single Stock Dove. I called back at the Reservoir on my home as a few Redshank had been there in the week. One was showing the reserve side
Posted by Paul Shenton at 12:50