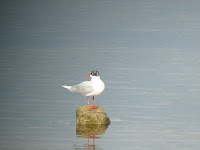 Just back from a great 12 days of full sunshine I did manage whip the Bins & Scope out a few times. Our campsite was right alongside the Fleet so every morning saw me heading down there with the dogs & kids. It was a little disappointing regarding birds i thought a few more waders may of dropped in. Birds to note were small flocks of Dunlin,Oystercatcher, Curlew & Little Egret. A single Whimbrel was close one morning and a Med Gull on 2 occasions. Whitethr 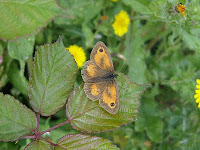 oats and Reed Warblers were on long the main path. Radipole Lake was a little better again Med gull and 2 Cettis Warblers having a kafuffle with each other entertained for a few mins half a dozen Common Terns were spread around the reserve and boat loads of Butterflies amongst the Budlias. I think some were Gatekeepers after looking through a book and Commas ( could right on a postage stamp my knowledge of Butterflies) plus little blue thing and many common ones. I manage 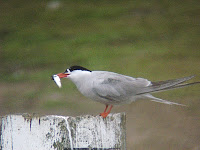 d fit 2 visits to Lodmoor in although one was a fleeting Twitch. Its a cracking reserve and one i wish was on my doorstep. Plenty of activity around the Tern colony with Sandwich and Common Terns feeding young and a call from my old man on the last evening saying there is a Roseate tern showing, resulted in cracking views amongst the commons it was a shame id no camera with me. Waders that were around were 5 Black Tailed Godwits, Dunlin, Common Sandpiper, Oystercatcher, Lapwin 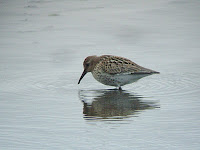 g and Curlew. Teal Gadwall & Shelduck amongst common stuff. A walk through the maze of reeds again produced Cettis, Reed and Sedge Warblers a Bearded Tit pinged away but didn't want to show itself. But the Hobby hunting the swallows put on quite a performance. Sparrow Hawks, Kestrel and Buzzard were around also the one I wanted to see showed up just before dark the female Marsh Harrier apparently the second time of nesting in Dorset for 50 years.