Id got a couple days birding ahead of me I wasn't sure where to head for South Wales looked inviting for some twitching but made the wrong decision to head Spurn on west winds. I was expecting a few bird to look at but literally nothing about other than waders on the Humber. Luckily 3 hours sea watching provided more entertainment with a Sooty Shearwater, Gannets, Red Throated Divers, Common Scoters, Pink footed Geese & hundreds of terns. A Guillimot was on the shore near Beacon Pools looking pretty miserable but after an hour he was a mile out to sea (good luck little fella) 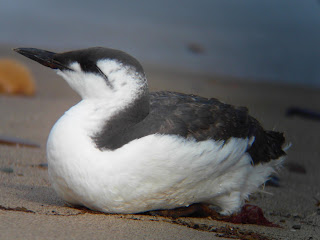 Wirral was on the cards the next day after an enjoyable sea watch the day previous Leasowe light house was the first mark.I was joined by a regular watcher things were slow start of with the odd Scoter and G C Grebe. Luckily I picked out an Arctic Skua which came reasonably close considering the wind conditions. A few attacks on the local gulls and it was off towards the Mersey mouth also a single adult Gannet headed towards Formby. A trip down the west coast of the Wirral didn't produce a great deal Peregrine common waders all 3 Wagtails ect. The launch of Inner Marsh Farm was today so I popped down there for a quick gander quite impressive but didn't stay long as it was to busy for myself. Peace was found at Frodsham marsh, 6 tank held good numbers of waders with double figures of Curlew Sandpiper 2 Little Stints, 4 Ruff and plenty of regulars. The Weaver Bend was rather quiet bar a Blackwit and Redshank.
Posted by Paul Shenton at 12:31