Despite the gale force winds that were forecast I still headed for the North West. When you want the met office be wrong they were spot on, so it wasn't the best conditions to be out & try out my new digiscoping camera. Even with the conditions I was pretty impressed with it especially in low light were I wouldn't of been able get a record pic. Leighton Moss was the main agenda for the day as at least I could use the hides. I arrived at dawn and checked the flooded fields on the approach road and was greeted with a Spotted Redshank amongst the many Redshank. The reserve itself had all the species you would of expected like Marsh Harrier, Willow Tit, Pintail, Shoveler, Goldeneye and other duck species. But the highlight for myself was a Great White Egret from the Griesdale hide. Before I headed to Heysham I checked the floods once more and was rewarded with the long staying Glossy Ibis, things were going to plan. Heysham was a different story I struggled to stand up in the wind so scope use was impossible, luckily a few birds were close in at the outfalls so managed pick out a couple of Kittiwake and Little Gulls. Not sure where to head next with dusk seeming very near I went into Morcambe for a little wader watching again all what you expect Dunlin, Knot ect but tides were all wrong for any numbers. Great days birding if a little short but light nights are creeping in again. 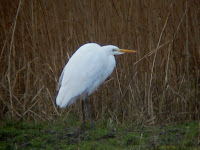