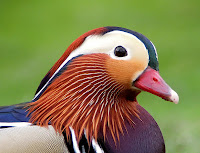 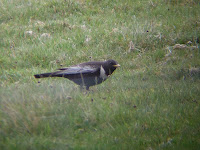 With next weekend looming when myself & Richard (top blog) attempt to see how many birds we can find in Staffordshire in a day. I needed to check a few things out species wise. Rudyard at dawn proved fruitless only common warblers & Redstart the lake holding very little bar a Common Sandpiper. Next on to Dipper location its still feeding young and Pied Flycatcher heard through the blistering wind.
Tittersworth was better LRP, Common Sandpiper and Oystercatcher all on the floating island. Common Tern through with a small flock of Black Headed Gulls. 3 Mandarin were knocking around feeding stations also my first Swift of the year. The Moors next in the hope of Ring Ouzel,id almost given up in finding my own up there but today was a little different with 4 offering pretty good views 1 male & the rest females. After half an hour with them I moved on clocking Stonechat common warblers, Redpoll and another Dipper in a spot Ive never seen them before. Wind was keeping most things hidden but Red Grouse popped there heads up now and again. There is still good numbers of Wheatear about a male Sparrow Hawk intent on dining on one at the paddock but 2 failed attempts left him knackered and sat on a wall. A bit of walking trying track down a tricky bird for the race failed. Back to west moorland produce another 3 Ouzels 2 males as well but unfortunately 50 yards the wrong side of the river Dane. Buzzard Kestrel and Spuggy Hawk but no Red Kite today.
An enjoyable recce but wind hindered a lot. Other birds included Linnet, Curlew, Mipits, Lapwing, Raven, ect