Tittersworth and upon the moors 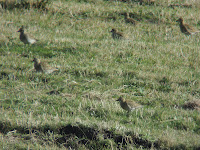 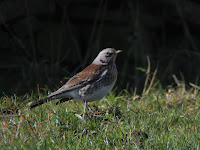 The plan was to head to Spurn today but with Bill not great the last couple of days meant somewhere closer. The next best thing too Spurn obviously Tittersworth. Ok probably not but a couple of non run of the mill birds were worth a trip there. A quick walk around Gun produced very little except cold hands 10 grouse a few mipits and a few roughty tufty Wrens braving the pretty harsh conditions up there. Everything else must of moved lower down. A male Shoveler on the conservation pool was a nice surprise as was a Jack Snipe later after a call from Steve whilst I was up on the moors. A female Goldeneye was my first this winter and a few Fieldfare went over with a large flock of Redwings.  The moors were pretty quiet again possibly the cold sent some birds to warmer climes. Kestrels Buzzards and Red Grouse were very active. Whilst at Gibtor I spotted 29 Golden Plover in flight near Flash. I found then later up there but 10 short of the ones in flight. Some large flocks of Fieldfare and mixed thrushes were up on the high hills as were a few Lapwing.Two and a half hours Harrier watching turned into heather watching, It didnt turn up and plenty of bodies up there waiting. I left at 5 so a little early for Short Eared Owls but a Pudding dinner was calling.