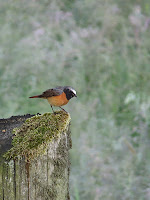 The weekend comprised of 2 early sort es up the moors, with a hour spent at Tittersworth before the crowds arrive. Tittersworth seems to be dropping fast and the island will soon be gone. Hopefully so will the tern chicks as they are looking rather big now and ready to fly. Kingfisher spent a few mins on the conservation pool before heading out of site. Spotted Flycatchers were still around but I couldn't locate the Pied pair. The Moorland looked well, cotton grass everywhere and Orchids around the verges. baking in morning sunshine its something that doesn't happen much. Nothing out of the ordinary was noted but many of the regulars were out to play. Hobby, Peregrine, Buzzard and Kestrel on the BOP front. Waders were represented with 2 singing Snipe, Curlew and Lapwing.
A few youngster were flitting about my favourite were a few Restarts putting demands on mum and dad for food. The Tree pipit was knocking around Swallow Moss as was a Grasshopper Warbler and another toward Elkstones. I may try get up in the evening while the weather holds to see the Owls and perhaps a woodcock 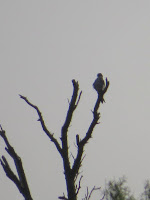