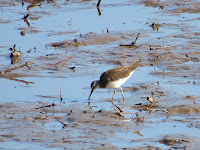 I woke up well before dawn so I decided go to clear ones head. Birding in Gods country aka North Staffs was the chosen meathod. I arrived at Rudyard with just enough light to check see if anything had dropped in, to my surprise there wasnt 1 bird around the now extensive mud. 10 minuted later I was at Tiitesworth pearing into thick mist I could only just make out the island. Luckily 2 Green Sandpipers were close to the causway as was a Common Sandpiper. I headed up into the hills for better viewing conditions. A male Peregrine was on view at Hen Cloud and the back of the Roaches had a large party of Stonechats inc 4 young. 2 Wheatears were around Knotbury and a few Red Grouse but nothing out of the ordinary. The West side of the moors had a grand looking Hobby being pasued by 2 Swallows. Gropper was heard but unfortunately I couldnt locate him. Other birds noted were a Bullfinch pair, Willow Warbs, Family party of Whitethroats, Buzzards and Kestrels ect. A quick stop at the now clear Tittesworth where 1 Greensand was on show as was the Greenshank, Common Sandpipers and Kingfisher. I was hoping for the Med Gull but it wasnt present whilst I was there.
Posted by Paul Shenton at 07:32