Normally some time in May myself and Rich of http://localbirdingforlocalpeople.blogspot.co.uk tend to run around Staffordshire attempting to see as many species of birds as possible. Things didn't work out as planned so a call from Rich mentioning an attempt in September had us up before dawn on Saturday.
Tittesworth and the Moors were our starting point. We notched a few birds we would struggle with down in the bird rich south Staffs. Red Grouse was very easy with a couple of large flocks about and the family of Stonechats seemed to be doing very well. A few Linnets and Redpolls got us off the mark too.Green Sandpiper, Common Sandpiper, Kingfisher, Mandarin and Goosander were the pick of the bunch at Tittesworth. 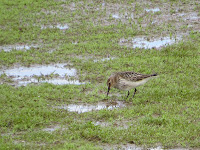 We then headed towards Utch but stopped off at local rivers and Croxten. The river produced no Dippers but Grey Wagtail was much easier. Croxten picked up a few more to add to the list.
Utch really got the list up with Greenshank, Barnacle Goose, Shoveler all tallying the total up. It was the mighty Blithfield on the cards next which wasnt bad but the promised winds and showers never developed so very little had dropped in. Black T Godwits were around Blyth Bay as was Curlew Sandpiper, and Yellow Wagtails. Close to the causway Dunlin, Little Ringed Plover and Ringed plover all chilled and fed in the shallows. Tad Bay got us 3 Ruff and Pintail.
The next journey took us to darkest Staffs and one of my favourite places in this county, Branston. Little Grebe,3 Little Egret, Bullfinch, 12 Curlew and a Moorhen at last. A bit of a drive now across county as we wanted to get to Belvide but a quick search of Whitmoor Haye produced diddly sqaut.

Belvide was having a small competition with other local reserves on the day and a quick rattle to Steve N put the dampers on things as they had had more birds than we had but they did have a lot more eyes about and picked up more Warblers than ourselves. Anyway we still had to check the reserve. On doing so Gargany, Jay, Black Tern, Blackcap, Yellow Legged Gull, Marsh Tit, Tree Sparrow and Osprey all Boosted the total. With only a hour or so of light left we decided to head to the chase in the hope of a couple more easy ticks, At that time of the day it was going to be tricky but we did manage Siskins taking the total to 90 or 91 if we count Feral pigeons. 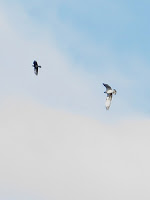 As always with Rich, an enjoyable day around our mighty county with a few reasonable birds and great scenery thrown in, how better could you spend a Saturday Spurn may be ? :) :)