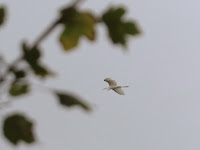 Tittesworh this morning was a little better than normal. I watched a Sparrow Hawk hunting Snipe with success and 2 Peregrines mock battling over the Northern end of the reservoir. A small party of Wigeon were knocking around the Island as were 3 Mandarin. A few thrush flocks came through both Redwing and Fieldfare were noted. But the best bird of the day and right good surprise was a Great White Egret. I looked up whilst rattling to Pete and saw white, for a few seconds I thought Little Egret then realised its blady massive as it flew by very quickly. A rush to the point hoping it may land proved worth while alas it only stayed a couple minutes before heading south. A couple of Pochard were off the point as well. Other birds of note were Willow Tit, Teal, Siskins, Goosander and Long T Tits. 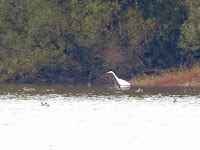