Today was set aside for a bit of local birding as Ive seemed to be playing away from home of recent & tomorrow looks the same. Gun Hill was the first point of call and Oh how it changed from my last birdless visit in the depths of winter. Skylark were plentiful & in full voice a few Meadow Pipits were back on there breeding patches. A Raven flew over heading for the Roaches whilst the Red Grouse were very vocal. A new one for me up there was a lone Stock Dove although there did seen a lot all around the area. A quick flirt down the hill to Tittersworth and after fueling up the bird tables it was time for a mooch around, nothing out of the ordinary no martins or summer visitors although a few of the regulars were back. Ducks included 5 Pochard a good flock of Tufted Duck a single Goosander near the causeway and perhaps a couple distant by the dam + a few Te 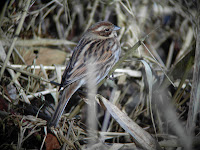 al, waders were just limited to 3 Curlew, Oystercatcher and 24 Curlew. Whilst on the causeway bill roled up tempting me with a run up the moors. A large flock of Golden Plover had been around for a while now but could we locate it not a chance. We did manage a MEGA at the back of the Roaches A single male Stonechat offered great views. Kestrel Buzzard & Peregrine all showed, the latter well as it seemed to be enjoying the sunshine until the jackdaws began to bug him a little. Again Ravens were around as well as Curlew lapwing, Stockdove. The only other birds to note were 41 Wigeon on a small pond towards Gun and a pair of Little Owls around the Tittersworth area
Posted by Paul Shenton at 11:25