Dawn On the Moors 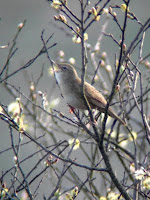 I managed get up into the hills early doors. It was generally a mooch around before I attempt another Staffs bird race, this time possibly with the help of R Powell. Anyway back to the birds pretty good morning nothing showing one would consider rare but nice to see locally anyway. One of the first birds Id saw was a Golden Plover with the next a Grasshopper Warbler. There seems to be a influx on the moors at the minute with around 5 or 6 reeling away. A flyby of a Cuckoo at Swallow Moss was welcome as were the many Wheatears dotted over the moors. 2 Snipe in different locations & good habitat for breeding too so hopefully there will more arou 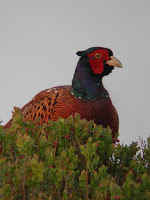 nd at the end of breeding session. Redstarts were around Knotbury area and plenty of Grouse keeping them company. A little Owl landed feet away from me near Flash I don't know who was more startled. Other birds around were Reed Bunting, Curlew, Lapwing, Pipits, Skylark, Buzzard, Kestrel ect.

I popped into Tittersworth on the way home the only surprise there was a Dunlin in near summer plumage. He was finding hard settle anywhere as the LR Plovers didn't seem to like him near. Last but not least called at a wood for Pied Flycatchers 3 present in a small area. Don't you just love Spring.

I managed talk the family into going to Sandbach before a bit of shopping. 3 Black Tern were preforming well at watch lane.
Posted by Paul Shenton at 02:58