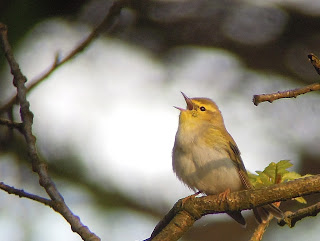 I had a tip off yesterday of a Wood Warbler the west side of Staffs Peak Disrtrict so it was up very early as time was limited, Id promised the kids we would go to a farm and off course it was off to Britania to watch Stokes last game of the season later after dinner. A couple of Redstarts & Pied Flycatchers on the way to the Wood Warbler once in the area the distintive song traveling pretty far. It didnt take long to locate it but prior to that Id fell off some stepping stones and got a drenching. I should of taken the bridge path. A pretty showy bird as well although he didnt sit still for very long. A quick look around east moors for anything of note Cuckoo at Boars Grove was a bonus. There seemed to be a hell of a lot of Wheatears around enjoying the bright calm morning.