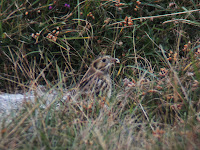 Today I decided leave the birding meca known as Staffordshire and head into Wales. I fancied a mooch around the Orm as a few good birds have turned there the last week. I started at the cemetery as did a few other blokes nothing out of the ordinary showed it head. There were plenty of commoner species too sort through Siskins Brambling, Goldcrest & tits. The Limestone pavement still held Lapland Bunting the day before so that was the next spot to try. The walk there produced Chiffy & Willow Warbler and a few Juv Stonechats. On arrival 2 blokes were already on one so I skirted behind them as not to flush it. It preformed reasonable well although in the longish grass. Time was ticking on so a quick call into Rhos for a spot of wader watching then onto Llandulas in the hope of a Surf Scoter. An hour staring at 1000s of Common Scoters plenty of Red Throated Divers and Auks did produce the goods. Distance seemed to be the problem as the rafts were well out or Im not cut out out for it. Plenty were doing the same with the same results.As I walked through my front door they had just been seen typical obviously someone knows there stuff or they came closer at high tide.
Posted by Paul Shenton at 14:25