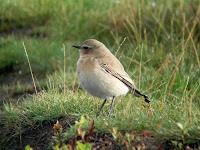 Not a bad mornings birding for N Staffs really, no megas but a few welcome birds. First stop was Rudyard there were plenty of Lapwings but nothing had joined them through the night, Kingfisher was seen once more and a few Teal are now back. Tittersworth was much better from the lodge 2 Dunlin & a Common Sandpiper were on the exposed mud with a Common Tern fishing successfully in Churnet Bay. 5 Mandarins were knocking

around the lodge with the mallards. Around the causeway and island a Snipe was the only wader spotted, 7 Goosanders were taking a break before fishing commenced. Buzzard & Raven were seen overhead but a first for me this year at Tittersworth came in the shape of a Kingfisher not 1 but 2. Nothing out of the ordinary in the gull flocks so i headed up the hill to Gun for a spot of moorland watching. Wheatear and 5 Red Grouse were pick of the few species present.