With plenty of time on my hands today I wanted take a trip out of Staffordshire. I'm a massive fan of moorlands and hadn't been to Worlds End for some time. I arrived at first light and I was the only person around bar some very confiding male Black Grouse up for a fight. Light was poor but I thought another ten minuted the sun will up. I didnt get chance as a van shot past me doing 40 the birds scattered far and wide. I had to make do with distant views for the next couple of hours. Crossbills were on my wish list so an hour spent in the car park with a bacon butty produced 2 males & a female close but well up in the canopies.


A few hours on the Wirral  was the plan for the rest of the day. Burton RSPB was the first stop although a very short one as I dont like the place but unfortunately its always worth a visit as some cracking birds end up there. Parkgate was much more rewarding, a few duck were present close to the road and the Long staying Spoonbill was not a million miles away though that cant be said for the Great White Egret but easily picked out over the marsh. a reasonable tide of 9.2m meant Hoylake was worth a visit for a little wader watching. Bar Tailed Godwit 1000s of Knot and Dunlin taking up most of the tide line but thrown in for good measure were Oystercatchers ,Curlew, Grey Plover & Sanderling. Last but not least was New Brighton in the hope the Purple Sandpiper would be roosting once again on the marine lake pontoons. They were and in pretty good numbers 15 counted amongst Redshank, Turnstones, Dunlin &  a few gulls. Early morning was catching up with me now, so home it was missing out Frodsham or Richmond bank which were planned for the final days birding 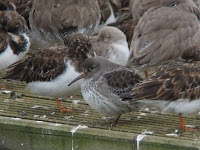