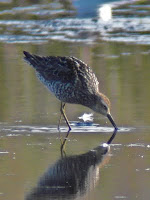 Our 2 week break took us to Dorset again. As always its not easy getting birding in with 2 dogs a Mrs and a couple of kids but a little was done, First was a Mega for myself that turned up at Lodmoor, the Phone bleeped saying Stilt Sandpiper so it was kit packed and away I went. Not bad views for 5 minutes before he nodded off too sleep luckily it stayed the whole time I was holidaying so a few visits to see produced some better views. Portland Bill was my next little so rte in the hope of a Balearic Shearwater but it was to be, Manx, Fulmars, Gannets and 2 Whi

mbrel were the best of my sea watching. Around the bill a few common migrants dropped in before there journey south, Wheatear were evident in some numbers around 50 at a guess, a few Willow Warblers & Whitethroats were there too and plenty of swallows. I walk around the gardens of the bird observatory in the hope of spotting a Melodious Warbler that had been trapped was still around but access prevented a good scout so I drew a blank. A couple of trips to Lodmoor & Ferrybridge produced plenty of marshland species at the former, including Bearded Tit, Sedge Warblers, various waders Greenshanks, Green Sandpipers, Common Sandpipers 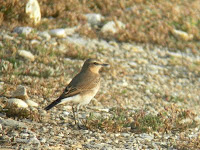 , Dunlin, Redshank & Black Tailed Godwit. The Tern colony was rather depleted but a few youngsters still held on for the constant supply of food the parents were bringing in. Duck wise a load of dull dreary species. Ferrybridge was good for Gulls with 5 Med gulls present 1 Yellow Legged plus the commoner ones. Waders feeding on the exposed mud were always Dunlin & Ringed Plovers but plenty of flyovers of Little Terns as they had been pretty succesful this year & lookin 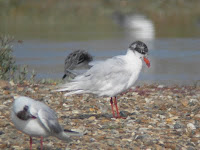 g at there breeding area I'm not surprised Fort knox rings a bell. Some of the better birds whilst away were 2 Crossbills over West Fleet Sandwich Common & Little Terns, Rock Pipits, Little Egrets, Green and Great Spotted Woodpecker were plentiful throughout. With agriculture a big part of life down Dorset the finch flocks seem to be every where with flocks of many hundred of Linnets and common species. An enjoyable 2 weeks in the sun with a few bird to boot but nothing was going to match the Stilt Sandpiper for me which was one of the first bird I saw in Dorset.
Posted by Paul Shenton at 13:00