Where Better than N Staffs

I was going to shoot over to Cromford for the Hawfinches but bone idle here didn't get up early enough. Oh well I was going end up local after anyway so that's was the plan for today. Rudyard was well up again so very little shore showing but the far side had some grassy edges that a Redshank a couple of Oystercatchers 50 Common Gulls which is a good count for there and 7 Cormorant. 3 Brambling were still around Horton area.
Next stop was Tittersworth, plenty of activity around the feeders and a few duck to note in the conservation area, The long staying female Pintail was still around as were Pochard, Tufties, Teal, Goosander & G C Grebe. A good flock of Curlew has built up but no other waders around. Finches consisted of all the common species ie Redpoll, Greenfinch, ect. Willow Tit great spotted Woodpecker and Nuthatch there too. A few hours on the moors proved most enjoyable. Peregrines are back but I didn't see them as climbers were all over the place & it doesn't look like notices will go up for a few weeks lets hope it not to late. Golden Plover hunt proved fruitless despite a good flock of around 50 knocking around, Swallow Moss disappointed with the shorties but Buzzard Sparrow Hawk & Kestrel about. I was time to go searching for them and luckily I managed 3 in one location. 20 minutes watching them 10 mins trying digiscope one in flight near on impossible for my talent. Luckily one landed if only for a few seconds. I must of spent 40 minutes enjoying them a bird you cant get tired of seeing. 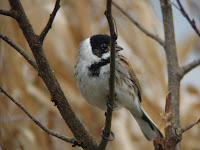