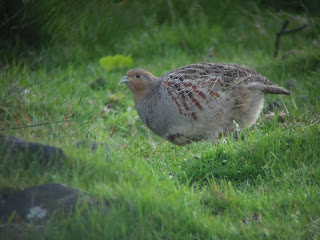 Yesterday I managed drag bill out for an hour up the moors. Basically I hadn't had a Hobby up there yet so it was straight Swallow Moss Area. We didn't have to wait long before one reared up over Swallow then dipped down over Revige.
Today was a little the same except a few hours more and a dam sight earlier. 5am at Tittersworth (churnet) had Spotted & Pied Flycatcher also a nice male Redstart. It was onto the Roches area after, Peregrine was pretty static the twenty minutes I was there. Further along near Roch end produced a pair of megas Grey Partridge a first for me up in the hills. Stonechats were at Boars Grove & Roches . Concentrating on east moors this morning I headed again for Swallow Moss area. J Oakes was already there but nothing of interest had showed again after a few minutes I caught a glimpse of a Hobby which showed well in flight for a minute before heading over the meadows. Bill arrived as we were watching Spotted Flycatchers Cuckoos & a Tree Pipit in the nature reserve looking pretty perky this morning. A family outing ment Id got to be home around ten so I called it a day. Other birds ticked off were Reed Bunting, Willow Warbler, Whitethroat, Buzzard, Kestrel, Redpoll, Curlew and other May regulars