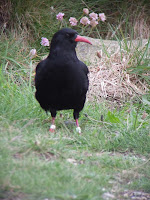 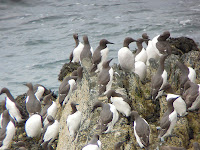 A planned camping trip with the family to Anglesey meant a couple of small trips out without the kids in tow, Its always a problem on a family break coupled with bad weather I only managed a mornings birding. I chose South Stack just after dawn as I knew it would get very busy later on in the day. Having the place to myself was a welcome novelty. A walk through the scrub produced a few Stonechats, Whitethroats & Rock Pipits closer to the rock face. At Elgins Tower a Chough fed on the short grass around it. I had to wait for it walk further away for a Telescope pic. Out at Sea quite a few Gannets drifted by but no Manxies. The cliffs were full as normal Guillemots taking up most of the space available but Razorbills holding there own on other parts of the slopes. Puffin was difficult and one point though Id go home empty handed luckily I caught site of one out to sea bobbing around. South Stack wouldn't be the same without Kittiwakes & it looked & sounded like a reasonable colony where just under the Lighthouse. A couple of Shags where knocking around and a few fly past Cormorants added to the list.  Herring, Lesser B Backs, & Ravens harried the colonies but they may have to waits a few days for easy pickings.
One bird you don't get there is Black Guillemot & possibly my favourite of all our Sea Birds. I short trip to the fish dock at Holyhead where they are guaranteed almost was next. I counted at least 6 with 4 paired up and nesting away. A little more distant than Id hoped for but very entertaining as they caught various crustaceans and fish in the dock. A great morning birding I only wish weather and time would of allowed at least another trip to Cemlyn Bay. That one will have to wait a few weeks.
Other birds knocking around the Island were Ringed Plover, Dunlin, Curlew, Buzzard, Sandwich & Common Terns plus the common species. 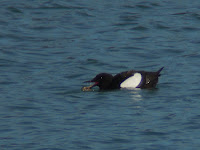