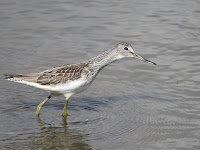 I have managed a couple of small visits locally to Rudyard, Tittesworth and Knypersley the latter was with the wife and kids in tow so that doesn't count. Rudyard did have a couple Common Sandpipers and a Lrp.  A count of 130 Lapwing on Thursday was my most so far. Tittesworth had the same birds as before but it is quite a change to have Greenshank a Green Sandpier and Common Sandpiper all on the conservation pool. Around the edge Spotted flycatcher had teamed up with a Redstart, they were feeding from the same bushes  as common warblers for some time. Kingfisher spent some minutes tucked away in the branches overlooking the pool. Knyp was poor but a Grey Wagtail braved the kids and dropped in quite close.