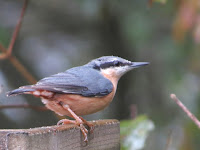 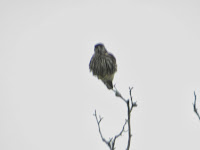 There was a report yesterday of a R L Buzzard around the moors unfortunately no one knew anything about it. Well being pretty close It had be worth a wander but I couldn't even conjure up a Common Buzzard. A few Red Grouse were around different locations the best bird was a Merlin parked up in a dead tree only a few feet away at Swallow Moss, the main problem was it was next to the road and a  car coming up behind me so I put the bins down and took a few shot through the windscreen, It didn't really work. It did return but was chasing a couple of Mipits towards Longnor. A quick stop at Tittesworth revealed 10 Common Gulls and the normal common stuff on the Table.
6 Red Deer were at Goldstitch Moss was also notable 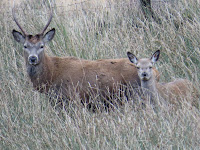