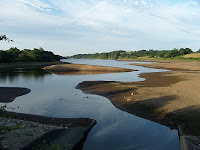 I managed get to Tittersworth around 6.15 not a person about. Not much water either. A couple of immature Herons fed in what was left of the reserve. Quite a few LRP about 1 with 3 young 4 Common Sandpipers flitted around the main lake whilst a flock of around 20 Lapwing bearing young dropped in. Nice to see the female Goosander with 2 young although there has been three. Whitethroat Chiffchaff and Willow Warbler all knocking around the causeway. Another nice one for the place was Little Egret. Just before i left 2 Peregrine came through chasing a pigeon which they failed at. Could be possible youngsters from the local area which have raised 3 this year ( nice one)
Posted by Paul Shenton at 04:25