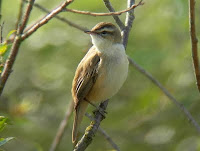 I had a weekend in finest Norfolk the plan was just to enjoy my birding and not run around if the phone signaled megas. I arrived at Titchwell an hour after dawn with very few birders about infact I had one part of the hide to myself. A good start to the trip with many common warblers and plenty to look at on the scrape. A lovely Little Stint in summer dress cam 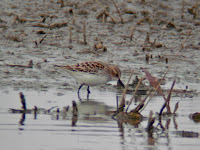 e reasonably close and was probably bird of the reserve for myself. All three terns were present Common Sandwich & Little the latter my favourite. Onward then to Cley a place I love especialy early mornings when it quieter. it was busy by the time I arrived but 4 Temmicks Stints made up for that. The eye h 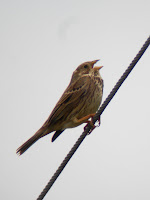 eld Golden plover, Whimbrel, Wheatear & lots of Yellow Wagtails other birds around the reserve were Marsh Harrier, both Godwits, Dunlin, and common ducks & waders. A small trip inland for a few farm species proved good although I couldn't find a Common Partridge, Red legs and Corn Bunting were much easier. Time for a bit of kip and then head to the heaths in search of Nightingale. It rounded the first day off well with one in full voice and out in the open. Day 2 started at Cley, Again Temmicks were there and Grey Plover & the 3 Terns plus much more. today was a 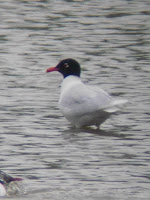 busy day so after an hour I moved onto Stiffkey. Parking at the caravan park meant a longer walk but one I haven't done before. Very Little about before I reached the fen on arriving it was buzzing with acctivity. Snipe, Common Sandpiper, Avocet, Godwits and Wood Sandpiper ect fed around the fen & whilst watching Med Gulls a chap shouted to me Montague's Harrier, A grand male drifted by SUPER. Burnham was next the only extra bird there which I hadn't had that day was a flyover Greenshank. But 2 Bearded Tits entertained me or frustated me as i tryed digiscope them. 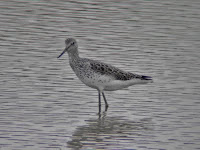 With still plenty of daylight hours left I hoped in the van and made my way to Thetford & over the boarder to Lakenheath. Now this is one my favourite reserves and an enjoyable few hour were whiled away there. Two pairs of Garganey were pretty showy but a little dis

tant. 2 Golden Orioles were in fine voice but very deep amongst the Popular plantations & Only 1 Hobby hunting. A brief glimpse of a Bittern whilst watching harriers hunting was very welcome. Cettis too was only a brief sighting after 10 minutes of searching the scrub were it was singing from. Bearded Tits seemed to have held there own over winter there many were seen around the reserve. On the way back east I called at Weeting for St 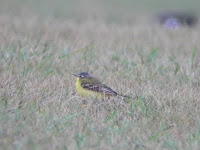 one Curlew, one was showing opposite the reserve and closer to my home for a couple of days a Barn Owl drifted past the van. I woke up early with a flat airbed so no time was wasted on the last morning. Cley again and a good morning was spent there. First the normal scan of the eye for migratory birds again many Yellow Wagtails and one bearing a blue head too. Whimbrel were there in numbers as were Wheatear. I did sucome to the phone as the night before Citrine Wagatil was seen near the windmill so I did attempt that with lit 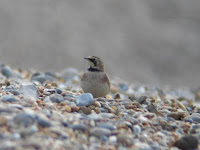 tle joy much too elusive for my liking so after an hour I moved on. Managed see Gerald there with his buddy who had traveled down to see it hope they had more luck. East end of the reserve was spot on a gaggle of four Spoonbills on arnolds flash made my morning the most Ive seen in one location. Greenshank can within digiscope range & Shore Larks were very showy amongst the dunes untill a dog walker disturb 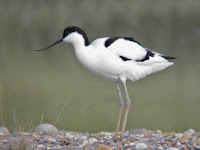 ed them. Time had come for the journey home but with Norfolk there is never enough time to fit it all in. A cracking couple of days were had. Walking through my front door the phone went Richards Pipit Cley and a few minutes later Collard Flycatcher at Holme, the latter I would of succome again Typical