With a few scarce migrants about around north Wales yesterday myself & Bill headed that way today. The first few hours were spent on the mighty Orm, many of yesterdays visitors had done a mid night flit. A chap pointed us in the right direction for a couple of Snow Bunting that had decided stay another day. Other than a few common migrants Kestrel, Buzzard, Great Spotted Woody & Gannet that was your lot. 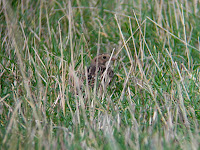 Although a little early we popped to Rhos for Purple pipers but to no avail plenty of common waders around the rocks. Llanfairfechan was like a mill pond when we arrived but plenty of birds on the sea to keep us occupied. Large flocks of Razorbills and Common Scoter. Smaller flocks of Red Throated Divers and G C Grebe and possibly the best bird of the visit a single Slavonian Grebe.
It was over to the Island now after a quick brew and cake.
Carmal Head area in the the search for Lapland Buntings after a steady walk and nearly stepping on them 6 left the ground but landed again after a few seconds. Finding the buggers even feet a way was tricky trying digiscope one, near on impossible. The last stop was Alaw estuary as a Lesser Yellow Legs had been there but hadn't been reported for a couple of days. The tide was well out meaning vast expanses of mud from what we could see nothing that resembled a yellow leg. Redshank, Curlew, Teal, Wigeon and Little Egrets were knocking around in view, as always an enjoyable few hours over the boarder just a shame yesterday birds couldn't hold out for another day.
Posted by Paul Shenton at 13:45