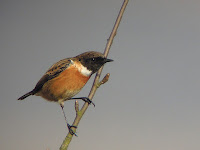 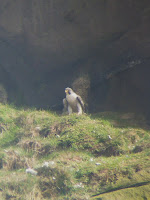 The first few hours after dawn were spent on the North Staffordshire moors. I was hoping for a Wheatear but I failed there after checking plenty of likely spots. Anyway first thing to do was get to see the Peregrines before it went bonkers with people enjoying the weather. Quite spectacular displays were preformed in what I can only imagine mock hunting the male had hold of a Jackdaw on 3 occasions but let it go when it was clearly in it talons. After that a little route around the west moorland produced lots of Red Grouse a Red Legged Partridge, Snipe, Curlew and Lapwing. My favourite a Pair of Stonechats. East moorlands was still suffering from low lying mist so difficult conditions to see much another pair of Stonechats, Raven, Buzzards, Kestrel and a few common birds was all I could muster. I headed back to pick Bill up who was desperate do a little watching bar still not in great condition. Tony was there when I arrived and when asked what Bill fancied it was the Moors. So basicly I reapeated what Id done earlier with much the same results. At the flash though I had a little luck scouting the fields for Golden Plover I picked up a Red Kite  which showed for a couple of minutes I believe thats my first for Staffordshire. Last was a quick trip to Dane bridge we manage see Dipper and Grey Wagtails but both very breif. Other birds to note were Stock Doves (probable singing willow warbler) Chiffchaff  Redpolls, Mandarin at Tittersworth and a few Goosander. SparrowHawk, Reed Bunting Mipits and Skylarks. No Wheatears for me but great few hours local. Two more weeks ill be beating them away with sticks.
Posted by Paul Shenton at 10:08