I was at Rudyard just after dawn there was very little to note bar 4 Oystercatcher. Next was to try for Dipper on route to Tittersworth,It looks like they have young so it was busy busy parents. Half an hour at Gun Hill got me a site first with 2 Green Woodpeckers. Very little time was spent at Tittersworth although Willow Warblers were new in. A quick stop at the Churnet and the familiar sound of Pied Flycatcher ringing through a bare tree but rather high up was most welcome. I cant head up into the moors without my fix of Peregrine again the male was Jackdaw chasing. The back of the Roaches produced scores of Red Grouse hundreds of Mipits and a couple of Stonechat. West moors had a fair drop in of Willow Warblers but no Grasshoppers yet,The female Pergrine was spotted chasing a Mallard low over the moor but luckily duck won this round. After a Ring Ouzel fail again decided to cheat and boarder hop into Cheshire. A female showed well for a few minutes the male was more elusive. Swallows and a single House Martin came through and plenty of Whetears around. 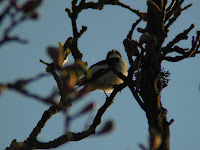 I headed back into Staffordshire for east moorland again a few Swallows heading north. A lone Red Kite again preformed well for a couple of minutes at close quarters then spent 10 minutes a little further away. The Regulars were out in force Wheatears, Kestrel, Buzzard, Curlew, Lapwing  Chiffchaff and more Willow Warblers. The lovely sound of Snipe was heard but it stayed well hidden in the long grass. I was expecting Redstart but never heard or noticed any. The long awaited Twitch to Stafford for the long staying Common Crane was to round off the day. A cracking bird for Staffordshire and it looked pretty wild and feeding well, it just seems to be hanging around too long. Nice to see many of the Spring migrants start to trickle in locally. Home in plenty of time to see the National too, claiming a third nearly won the family pennies we spent on it.