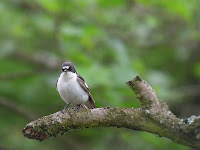 I managed to tempt Bill out for a couple of hours today. A lateish start giving him time to prepare himself but we were at Tittersworth not longer after 8am. The water levels are so high there was little to note around the water bar the pair of Common Terns on the island. The Churnet held plenty of Spotted Flycatchers and common warblers but the Pied Flycatcher has disappeared. A few seconds of a male Redstart in full view before it disappeared over the hill was welcome. The Moors were a little rough with strong winds and heavy showers hampering things. We still managed a couple of Stonechats at various places and the normal species with a Snipe thrown in for good measure. Shelter was needed so again is was back to Tittersworths wooded areas. This time we got a Pied Flycatcher actually a pair feeding soon to be fleglings. Blackcap, Spotted Flycatchers, Redpolls, Willow Warblers, Chiffchaff, Nuthatch plus many more common residents and summer migrants. Not a bad morning helped by getting Bill out and about.
Posted by Paul Shenton at 06:01