Dipped Buntings & a Desert in Rhyl 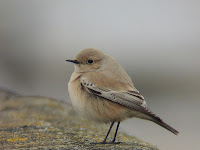 We popped up the moors to try and locate the Snow Buntings that had been there for a couple of days. Im pretty sure it was late 80s when I last saw any up there. A few local lads & lasses already there but no sign as yet. Seed had been sprinkled in the likely spot but no takers. We gave it 90 mins but word came through of a Desert Wheatear at Rhyl a great bird and just over an hour away. I thought Bill was joking when he said get in car were going. On arriving quite a few birders and photographers were present by the time we reached the bird the big lenses boys were chasing it down the prom. A few minutes stood back watching provided not bad views. Anyway plan B was stay put for a while until I was on my own and hopefully it would get chased back to me. Luckily it did, down to a couple of feet. A little cracker it was too.
Posted by Paul Shenton at 08:06