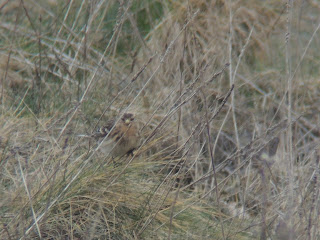 A call during the week from Bill ended up with a trip to North Wales. Hitting the first spot of the day around 9.30. Flint castle where a good size flock of Twite have been rather easy to find. 30 Seconds later they were feeding very close but amongst the vegetation. I could of spent a bit longer here but those pair wanted to get off and try for the Surf Scoters at Llandulas. The sea was a little choppy and we could pick out the Surfs amongst the 10s of thousand Common Scoters. Velvets were much easy when on the move a flock of four then a smaller flock of 3 went past. Other birds were Rock Pipit, Red throated Divers, GC Grebes, Mergansers and Guillimots.
The sewerage works for a Firecrest was next, plenty of Goldcrests and common species about with a bonus Chiffchaff but we didnt come in contact with the rarer crest. A bit of grub and brew then up into the hills for Hawfinch. The first Church produced one in flight so not really what we wanted but a Bonus Merlin parked up over the estuary was welcome. The other church produced better views of two females, that's two years running I havn't seen a male. A trip to Cromford may be on the cards. I was ready for somewhere else but the lads were ready for home. An enjoyable day out across the boarder.
Posted by Paul Shenton at 03:45