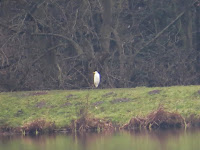 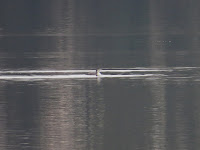 The van was pointing in the direction of the moors this morning but once the engine kicked up I decided head south for a few good birds in Staffordshire, one a Staffs first for me. Aqaulate Mere was the first stop with Long Tailed Duck, Smew and Velvet Scoter all present the day before. I spent some time there hoping for all three but only managed the scoter which was the one I wanted see. The first views were not too bad but it went missing for quite some time and views after that tended to be distant. The other 2 were seen but sporadic thoughout the day. Pintail, Shoveler and Goldeneye were worth noting.
It was onto Gaily then this time with more success Both Great White Egret and Great Northern Diver were easy to pick out although quite distant. Last and definitely least  was a Shrike hunt on the chase and no surprise to myself dipped again.
Posted by Paul Shenton at 14:12