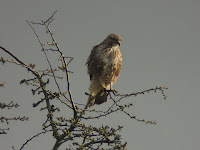 Today was going to be my 1st of January after getting Flu Boxing day it is my first venture out of the house. With energy levels still very low it was a quick trip to Tittersworth then up onto the moors for an hour. 8 Goosanders were on the main lake as were a couple of Wigeon. Quite a large flock of Gulls present even at mid morning, mainly Black Heads but a few Common Gull amongst them. A lonesome Snipe was it for Waders.on the Conservation pool but there were a few Teal, Pochard, Tufties and Mallards. The feeders were pretty full so I saved a bit of seed but after an hour Reed Buntings, Tits, Nuthatches, Black Headeds and Finches had made there way through it quite quickly. The Moors were quiet as normal but Buzzard and Kestrel were evident as was a Peregrine at Revage. A quick look at Beadre for Dippers on the way home produced a pair and I carried on to Dane Bridge but non on show this time. It was nice to get some Birding done but would of liked to of been able last out a little longer.
Posted by Paul Shenton at 12:12